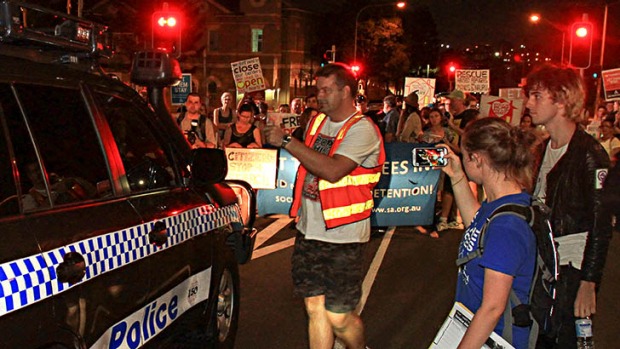 Recently I posed twelve questions to help myself understand the events of recent weeks and help think through what has happened and where we are all going. This is my first attempt to answer them. I doubt I will answer – in writing – all twelve.

The answers I provide are necessarily subjective and partial. I only attended the vigil twice. I welcome disagreement and corrections. However I think that subjective and qualitative reflections on collective experience are a vital part of how we understand them.

I think there were three separate elements: the decision by staff at the Lady Cilento Children’s Hospital to not discharge Asha on the basis that Nauru didn’t qualify as somewhere safe to return to; the vigil which became a blockade of sorts faced with the possibility of Border Force taking Asha; and the wave of symbolic actions and stunts where people proclaimed #LetTheStay with the aim of generating and circulating imagery in the media (social and otherwise).

It is the first element which is probably the most interesting and unknown. In all the swirl of reporting it is not entirely clear who made the decision, how it was made and what processes led to it being made. In the course of events the medical director and the state health minister both expressed support. A friend who is a paediatric nurse at the LCCH commented that the decision had been coming for some time. The fact that the AMA is increasing its opposition to mandatory detention of children suggests that something is going on. From the outside this opposition and the decision at LCCH is framed within a commitment to doing their work as health care professionals properly. Thus care and a commitment to care is the axis of this very interesting rebellion (cf.Precarias a la Deriva 2006).

It was an action with very real power. The staff at LCCH were able to use the hospital’s role in the detention complex to subvert that very same complex. I suspect the social standing of doctors and nurses and the significance that LCCH and Mater Mothers has in the minds of Brisbanites also increased their power.

The vigil emerged in response to the actions of the LCCH staff. I have seen reports that claim both QCU and GetUp! initiated the call to do this. The fact that it became an ongoing occupation of space both gave it a radical and transformative quality and places it within a global trajectory of occupations. A number of rallies were held there often with a sectional theme: union members one day, school kids the next etc. Most activity involved waiving signs, hanging out and discussing and doing media. Sometimes these became counterposed. For example a Brisbane Free University discussion was interrupted for a media live-cross. It was not clear to me how decisions were made, if collective decisions were made or that decision making was really abided by. Was this a problem? Was it a virtue?

Jonathan Sri wrote on the experience of the vigil as follows:

The vigil is becoming a scene. A place to meet up. A thing to do. A kind of social organism. While no-one’s keeping accurate count, I expect that the number of people who’ve spent time outside the hospital waving signs or conversing about politics already exceeds several thousand, and momentum is still building

New relationships are forming, as participants bond over shared values and experiences. A broader network of supporters supply home-cooked meals and takeaway coffees. In the evenings, musicians drop in to entertain fellow activists. Young couples are sleeping on the concrete under the stars. Some of us sit up until 2 or 3am talking political philosophy with strangers who we would never otherwise stop to converse with. A sixty-year-old trade unionist with a checked shirt and a working class drawl chats about intersectionality with a pink-haired twenty-six-year-old anarchist. Later a Pakistani Uber driver stops by to seek moral support and informal legal advice on his visa claim. This little corner of Brisbane is alive and pulsing in a way that no shopping mall food court or rooftop cocktail bar could ever hope to replicate.

The vigil’s transformation into a blockade on Saturday is interesting. Just the day before I was in a discussion where the idea of blockading the hospital was seen as impossible. Indeed I am not sure that the hospital could have actually have been blockaded effectively. Still the combination of the LCCH staff’s intransience and the willingness of hundreds of people to directly defy Border Force (and probably the willingness of the state government to stir the possum) seemed to provoke a humiliating back down for the government. What caused this radical leap in what people were willing to do? Why was the government so weak?

Despite the geographical closeness there wasn’t a real and sustained encounter between the staff and the vigil. At one rally when a speaker asked all those that worked at the LCCH to raise their hands I didn’t see a single hand go up. This could be due to instructions from various levels of management for employees not to be seen in uniform at the vigil and Qld Public Service policy that sees political activity where one is identifiable as a QPS employee as unethical and thus a disciplinary matter. But this compartmentalisation is I think always a limit to the generalisation of struggles.

As for the wave of selfies and banner drops? Whilst I think that it is often easy to criticise actions as purely symbolic I think we should pause here. The Right have been quick to critique them as simply virtue signalling: as empty gestures where people try to make themselves feel good but change nothing. I am no Gramscian (and thus will mangle the concepts) but I think that we may understand this wave as being ‘counter-hegemonic’: as working to establish a different common sense which has then emboldened people’s stances. The very brave actions of banner drops are deeply inspiring. Ideology is always a key element of how a society reproduces itself (Althusser 2008). Thus challenges to ideology are an important part of opening the terrain for a rupture just as a rupture challenges ideology. Actually I think I want to go further. It was the interrelationship of this wave of #LetThemStay statements and the vigil and doctor’s actions which is important. I wonder, and this is pure speculation, if the vigil would have leapt to a blockade like it did, or even if the LCCH stuff would have maintained their position if there hadn’t been this generation of a counter-hegemony. Equally would #LetThemStay have become so popular without the actions of the LCCH staff and then the vigil giving it a content that it referred to?

The first two elements have now ended. What I do see around me is a desire to continue and deepen the struggle and to find forms of acting that is at least equally real and concrete.

This work is licensed under a Creative Commons Attribution-NonCommercial-ShareAlike 4.0 International License.